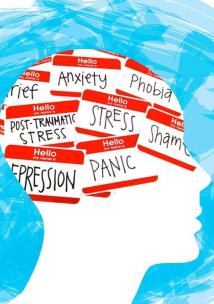 “I've been offered a service, but don't think it will help… I've been like I am for all my life, and life's been difficult. I don't think my GP believes me. I think it's too late to change the way I am, but I'd like a diagnosis to understand it, to put my finger on it, to justify it for me.”
— Mental health service user

•        On the whole, service users and professionals were complementary about mental health providers, individuals, and organisations.

•        Service users spoke positively about being “listened to and treated with concern”, but less positively about providers “addressing [their] needs or making plans to do so”, perhaps reflecting the short-term nature of some support.

•        GPs, the first port of call for many service users, either did not understand the patient’s emotional needs, or did not recognise symptoms as requiring mental health therapeutic support (as opposed to medication for example).

•        the service they were offered had been used before unsuccessfully;

•        the service they were offered would not meet their mental health needs; and

In addition to the above, professionals added the following reasons:

•        lack of resources and investment that are not in tune with the increased demand;

•        lack of clear pathways and referral processes (including less ‘joined-up working’); and

•        thresholds too high for many services, and service users had to be in “urgent” need before being offered anything suitable; and

•        Most professionals (92%) knew where to go to in order to get support for their client if they were in a mental health crisis, for example posing a risk to themselves or others.

•        Nonetheless, professionals were less certain about whether their clients would receive the support they needed, with only 16% having “confidence” that service users will get that support. This is a 76 percentage point difference between awareness and confidence that service-users would receive the crisis support they needed, and is one of the most significant findings from this study.

Service user comments indicate that general short-term treatment is favoured over proper diagnosis, there are not enough specialist services and a lack of follow-up care. Also care lacked consistency of practitioners in some cases. Professionals’ comments again mirrored these views.

•        90% of service users wanted more services than they were currently receiving.

•        The highest preferences were for Therapy, Brighton & Hove Wellbeing Services, Counsellor, Psychologist and GP. It is difficult to conclude from the data as to whether these were currently service users who wanted longer with the same service or if they were not currently using these services.

•        Services often didn’t meet the needs of people who had identified as  LGBTQ+, people whose first language was not English, people from the travelling community, ethnic minority groups, people diagnosed with neuro-diverse conditions, patients dealing with alcohol and substance addictions and those in temporary accommodation support or homeless.

•        Accommodation options are sometimes unsuitable for, and in some cases negatively impacted upon the mental health needs of service users.

Based on the evidence shown in this report, from the experiences of 137 service users and 96 professionals and clinicians, Healthwatch Brighton and Hove puts the following recommendations forward to the Brighton & Hove City Council (BHCC) and the Brighton & Hove Clinical Commissioning Group (CCG):

Investment – this underpins all the following recommendations: Mental health services and accommodation support need further financial investment as well as redesign to make the most effective use of existing resources in order to achieve the following:

•        Increase public awareness of mental health issues and knowledge of how to seek support.

•        Improve the accessibility to support, especially for those in crisis, and simplify the navigation through the system, for both service users and professionals.

•        Ensure GPs and other service providers are trained in recognising mental health symptoms early on and referring patients for appropriate support.

•        Address the thresholds for receiving services to allow for preventative care earlier on, rather than waiting for someone to be in extreme need.

•        Increase the service offer, for longer than the usual six-week period, enabling the service user to build long-term strategies with the professional.

•        Provide ongoing support and/or regular (less frequent) check-ins to ensure the service user keeps on track and progresses to a point where they do not have to start again, the complete process of diagnosis, referral and waiting for support.

•        Offer specific care (in addition to the usual CBT service) for bereavement, trauma, domestic abuse, and post-natal depression, where relevant.

•        Ensure a smooth transition between children and young people’s services and adult services, offering a specific care package (and accommodation) where needed.

Both service users and professionals were generally complementary about mental health providers, mentioning individuals and organisations who had provided high quality of care.

GPs are the first port of call, but more training is needed

65% of service users had approached their GP for help in accessing mental health services. However, comments from some service users showed that their GP did not understand their emotional needs, sometimes misdiagnosing their condition, treating the physical need rather than seeing it as a mental health symptom, and there was a tendency to rely on medication rather than therapy.

People are unsure where to go

Some service users reported they did not know where to go for mental health support. Note that 27% used an internet search to find support. Comments from both professionals and service users indicate that there was not enough public awareness about these services and how to access them.

When service users were referred, many comments told of long waiting lists, or being offered services that had been tried and test before without success. Note that 60% of service users found waiting times too long and 31% were offered a service they had used previously and had found it not to meet their needs. There was also a lack of out of hours support offered.

The majority of professionals (92%) knew where to go for crisis support, but only 16% were confident that their clients would be able to get the help they required. Leading comments from professionals indicated that thresholds were too high and waiting times were too long and this was often linked to the knowledge that services were generally under pressure, under resourced both in funding and personnel.

Services are not joined up

These issues were compounded by a lack of joined up services. Both professionals and service users commented on the need for better communication within the NHS and between NHS mental health services and third sector organisations. This was exemplified by the sometimes poor transition from children and young people’s services to adult services.

Support is needed for longer

Where service users were offered support, the timescale for this was felt to be too short in duration and sometimes lacked consistency i.e. not having access to the same practitioner. In addition, service users spoke about the lack of follow-up care, which was particularly disappointing if progress had been made, often resulting in a return to the system, further waiting and another round of similar short-term support.

Both service users and professionals commented on the lack of tailored support to meet user needs and the importance of offering therapies that specifically dealt with bereavement, trauma, domestic abuse, and post-natal depression.

In relation to the above, service users and professionals saw the need for more services. Between 20% and 30% of service users said they would like further support from therapy, the Brighton and Hove Wellbeing service, counselling, psychologists, or a GP.

Mental health services and accommodation services in Brighton and Hove require further financial investment as well as redesign to make the most effective use of existing resources to ensure the service offered meets the required need.  Comments from service users and professionals demonstrate that support for mental health conditions needs to be long-term, consistent, robust, and tailored to allow for a range of additional needs and circumstances. This is even more important when we consider the context of the COVID pandemic, in which the health and social care system has seen a significant increase in the demand for mental health support.

To read the full report and summary with recommendations, please click on the links below:

Executive Summary with recommendations and response from the BHCC and CCG

You can help make health and care services better by sharing your experiences and ideas. 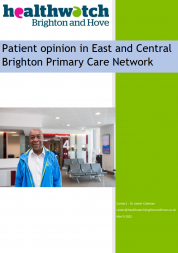 Report: Patient Opinion in East & Central Brighton Primary Care Network
30 March 2022
Our latest report looks at the how local residents feel about the...
Find out more 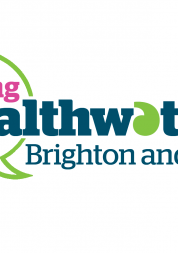